This Pilates class for seniors aged from 66 to 89 - is smooth, strong and solid 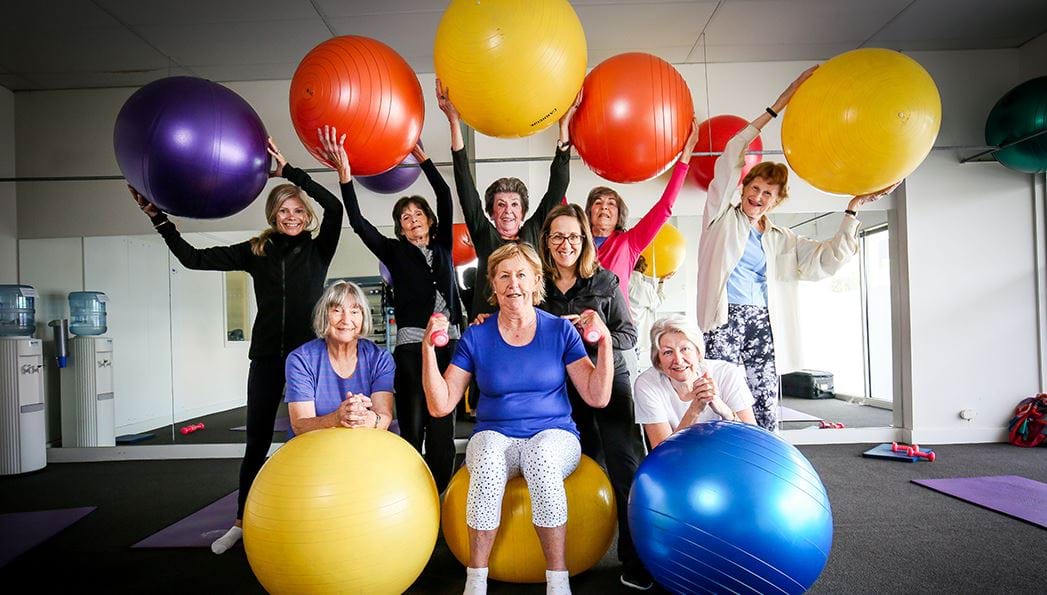 This story was first published in the 2018 Seniors Card Magazine.

It’s the eve of her 89th birthday on a sunny morning in March and balanced straight as a board on a large gym ball, Joan Martin is holding the plank. Joan is part of a regular group of women – age range 66 to 89 – who attend Pilates at Eastside Physiotherapy in Camberwell every Thursday.

Let’s go into cat; now flatten into cow; and arching; and flattening into cow, physiotherapist Helen Boursinos instructs in the warm up, which will end an hour later with the class holding the 30-second plank, twice, while balanced horizontal on a 65-cm pumped up exercise ball. Now grab your hand weights and rollers for gentle pelvic tilts – imagine a clock face on that belly – start at 12 o’clock, down to three, now six, up to nine – feel that movement and keep that breath moving as you circle, nice and smooth; now reverse.

Sitting straight on their gym balls, the women now move into alternate leg lifts and opposite arm lifts holding their weights, no mean feat when the nature of a ball competes with balance – this requires iron-level core strength and coordination. But not a wobble, not a roll – this Pilates class for seniors is smooth, strong and solid.

Next thing the women are standing facing the mirror to ensure their posture doesn’t slacken, as they lift the colourful balls high above their heads, with alternate leg lifts adding an extra challenge for balance. Up the balls go – backs straight, heads high, balanced.

I just love taking this class, Helen says.It’s so inspiring and I’ll be very happy if at their age I have their fitness and strength. Not only does it ensure they stay active in all aspects of their lives, it’s also a very social activity making it good for the mind and the spirit. They certainly have a lot of fun; there’s always lots of laughter in our classes.

Helen says regular Pilates is great for improving core strength, which improves balance, posture and overall fitness. All vital tools in the prevention of falls. If you do trip or fall, it makes it more likely you will catch your balance and prevent a more serious injury.

Lorraine Borley, 80, adds that the Pilates is great for reducing the effects of a more serious injury if you happen to trip over a grandchild. Something she actually experienced, but she believes her regular Pilates class helped reduce the injury by providing a strong foundation for rehabilitation. When the treating doctor discovered she did Pilates, Lorraine says she was told: you’ll be an easy patient.

After the class the colourful group of seven, dressed in bright tees, walk together a few blocks to a café for coffee. Each week group numbers vary as participants sometimes have other commitments in their busy lives. Anne Brown, 78, a retired publican was away in Ballarat and archaeologist Heather Jackson, 80, informed the group she wouldn’t be attending in the next two week as she was due to co-present a paper at an archaeological conference in Munich, Germany.

Veronica Sloane, the youngest in the group at 66 and who joined the group three years ago, says as well as the exercise she enjoys the group’s diversity and hearing about everyone’s past and present experiences. It’s just such an interesting and engaging group of people – I mean we have two retired publicans, a former pharmacist, an archaeologist who is still doing work in the field, and we have former teachers and women who have worked in business, she says.

Barbara Mann, 84, who has been attending this group for around 10 years, says regular Pilates keeps her mobile and flexible. I can’t imagine what I’d be like if I had not been doing Pilates – I guess I’d be old,” she laughs. “I’m so pleased I am what I am at 84. But jokes aside, Barbara is an advocate for people over 60 continuing or starting Pilates or Yoga because she believes it is a panacea for pain prevention and limits the risk of falls.

Julie Burke, 78, is recently back from a week of skiing in Utah. She also believes the Pilates has kept her agile and flexible, and consequently, able to don a set of skis and hit the slopes. As the class is ending and the promise of coffee and a chat with the group awaits, Joan is rolling out of her plank and forming an arch over part of the ball to give it “a big hug” for a well-earned stretch. In a day she will be 89 and, she says, she really doesn’t feel it.