Inge's Danish heritage comes out when it comes to ageing.

This story was first published in the 2018 Seniors Card Magazine

Inge Ramos, 78, may have been in Australia for almost 50 years but her Danish heritage comes out when it comes to ageing.

"We Danes have very long lives,” she laughs. “But not as long as the Swedish. They say if you want to be a Swedish king you have to live a long life because the reigning king lives for so long."

Inge puts the Scandinavian predisposition for long lives down to good genes, roughage and pushbikes. Riding a pushbike is so much part of their culture and a practice they keep into their older age; evidenced by her friend Inger in Denmark who was still riding her bike every day at 84.

Even being blind or having a recent operation on her ankle hasn’t stopped Inge from staying active. After all she was line dancing right up until her foot operation last November and intends to hit the dance floor again in six months at the East Geelong Seniors Citizens Club.

Staying active is a very important part of Inge’s life, and thanks to $5,000 from the Victorian Government through the Participation for CALD Seniors Grants Program, Inge attends Mindful Moves – a mixture of yoga, Pilates and Tai Chi – at the Multicultural Aged Care Services (MACS) in North Geelong every Monday morning. In 2017-18, the Department of Health and Human Services provided 54 organisations with CALD Seniors grants to create or expand community participation for culturally diverse seniors. 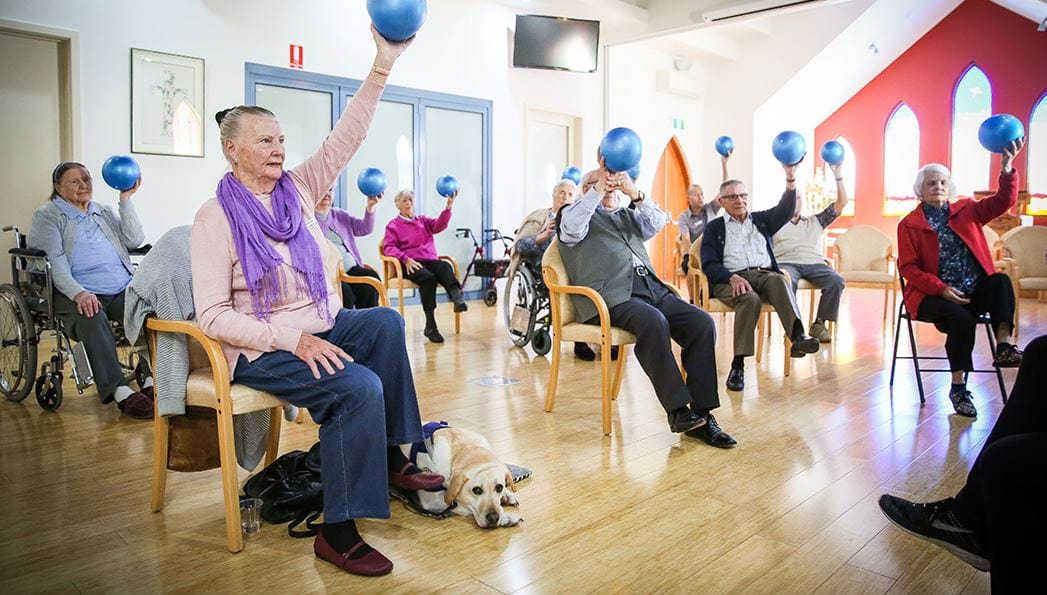 Inge, who attends Mindful Moves with her seeing-eye dog Frances, says that sometimes after a class she discovers muscles she didn’t know she owned. "The teacher is very talented leading us through the class and you don’t realise you are exercising – it all flows so nicely and with the music it’s very relaxing. I really look forward to the classes because they keep me agile so that I stay active."

Inge says the Mindful Moves classes do something for her mind too. I think the sayings goes: ‘lose your mind, find your soul’ and I totally agree with that,she says.

Laughing is the other exercise that keeps Inge young. "They say laughter is the best medicine, and I laugh a lot," she, well, laughs.

Last year a health professional asked Inge to rate on a scale her happiness. Ninety-eight per cent, she replied. But how could that be?

The sun is shining, there are flowers in the garden and I have a wonderful family and fabulous friends, came her answer.