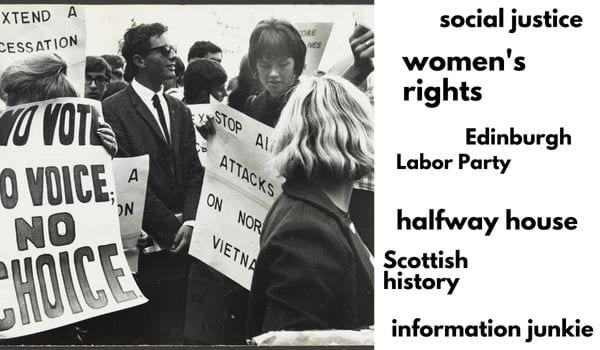 Image courtesy of the State Library of Victoria

The Vietnam War changed Muriel McIntyre’s life; fanning her strong sense of social justice. After joining anti-war protests, the mother of two became the President of the ALP at the Mitcham Branch in Victoria and a women’s libber; fighting for abortion rights, setting up childcare and running halfway houses for women fleeing family violence.

Muriel was born in Edinburgh in 1941, and immigrated to Australia when she was 11. Her parents sent her back to Scotland for a year when she was 17, to spend time with relatives. It was on the ship back to Australia that she met a handsome, older Englishman called Mike, who she eventually married.

‘We moved up to the Snowy Mountains. He was working on the hydro scheme. There were 27 nationalities working up there and we met some crazy people. People who'd been war criminals — one guy was having his teeth fixed and he said to the dentist, “I know you. You were at Belsen (concentration camp)”.’

Muriel had her first baby in 1967 and became a regular talkback caller on Barry Jones’ 3DB program, airing her objections to the Vietnam War.

‘Sending young men off to kill and be killed — it just seemed so wrong.’

Jones, who went on to become an MP, suggested Muriel join a political party.

‘So I joined the Labor Party; I ended up being president of the Mitcham branch, which was unheard of in those days. Women could be secretary but never president,’ Muriel says.

Muriel went back to school at night to get her Higher School Certificate, and then a Bachelor of Education and became heavily involved in Women’s Liberation, fighting for abortion rights.

‘There wasn't a lot of contraception and wealthy women could get abortions, but not young girls, or married women who couldn't afford to have another child.’

After one rally, the women went to the Graham Hotel, but they were refused service in the front bar. Back then, women were confined to the more expensive ladies’ lounge. ‘So we took him on. We notified all the newspapers and word got out and they said, “Okay, we'll serve women”.’

Helping women fleeing family violence was one of the priorities of Muriel’s group.

‘We set up a Halfway House. That was confronting but these women had nowhere else to go. We were all rostered onto that and we had to keep it secret. There were many women like me who took action because they wanted a kinder, safer and fairer world for everyone.’

Their actions could sometimes be dangerous.

‘My lovely friend Robyn took one woman in and told her, “Don't tell your husband where you are”. Robyn came home one day, and the bungalow was burnt down, the dog's throat had been cut, the guinea pigs had all been slaughtered and the woman was gone.’

Muriel’s Women’s Lib group set up the first volunteer-run playgroup in Victoria, taking it in turns to look after each other’s children.

‘We persuaded a lovely man at the local Presbyterian church to let us have the hall. We didn't tell him we were women's libbers.’

Through it all, Mike was a supportive and loving husband and Muriel was devastated when he died, leaving her a widow at 58.

Muriel was teaching Scottish history at the University of the Third Age when a widower with a strong Scottish accent joined her class. The couple ended up falling in love and have now been married 10 years.

The couple now live in a retirement village in Mornington.

‘I'm as engaged, intellectually, as I ever was. I'm still an information junkie. I still devour everything in the newspapers. I still get upset about injustices,’ Muriel says.