Looking back, it’s clear that Margaret Wall had polio as a child but back then all she knew was that she was bedridden and had to spend several years in plaster ‘from neck to knee’. 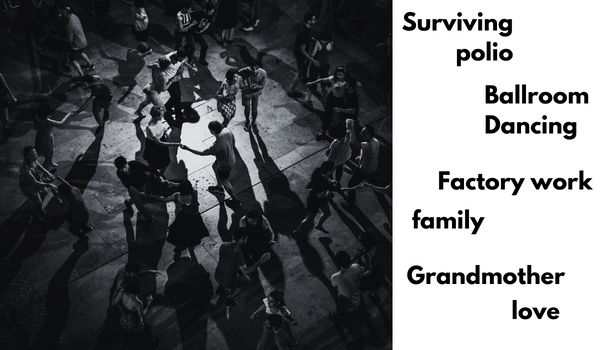 Looking back, it’s clear that Margaret Wall had polio as a child but back then all she knew was that she was bedridden and had to spend several years in plaster ‘from neck to knee’.

Born in Marrickville in 1932, Margaret was from a large family.

‘My dad was a policeman and mum was having babies. There were eight children together, but a son didn't survive. There were five girls and two boys in the end,’ Margaret says.

Having such a big family proved to be a great help to Margaret, who didn’t get to finish primary school after being struck down with what was then a mystery illness.

‘It was not a healthy childhood. In the years that counted so much, I had paralysis,’ Margaret says. ‘I had plaster casts on and off and anything else they could find to try, they tried it.’

Bedridden for several years from the age of seven, Margaret spent much of her time reading, and relied on her older sisters for her education and entertainment.

‘Back then, people didn't decide that you still needed to do things. I mean, mum had six more children and dad was working…so nobody had any time.

‘I could read and write, so that helped me with my learning — and I was interested in learning.’

Eventually, Margaret recovered and was able to walk again. At 15, she got a job at a local factory that made sanitary pads.

‘It was just something that I could manage. It wasn't good. I didn't enjoy it. But I just would do any kind of work that I could do, because I couldn't do a lot of things and this it was good because it didn’t need a lot of movement.’

As her health improved, Margaret took up ballroom dancing.

‘I didn't play sport or anything, but I did ballroom dancing. I could go into competitions, but I didn't want to, I just wanted to enjoy it.’

It was at a dance at Marrickville Town Hall that she met the man she would marry, fellow dancer Robert Wall.

Unfortunately, the marriage wasn’t a success and Margaret ended up raising her daughter Hilary as a single mother, but she continued to have great support from her family. Her sisters, in particular, proving they were worth their weight in gold.

‘They were there whenever I needed them. My sisters were all good. My brothers were good. Dad and mum were marvellous.’

Margaret has recently become a great grandmother and, given her rough start to life, she is pleased to still be alive and well.

‘I’m kicking a good round, I reckon,’ she laughs.