Margaret Keck has had a big stack of books on the shelf above her bed for the past six months, but the 88-year-old hasn’t had a chance to look at them. 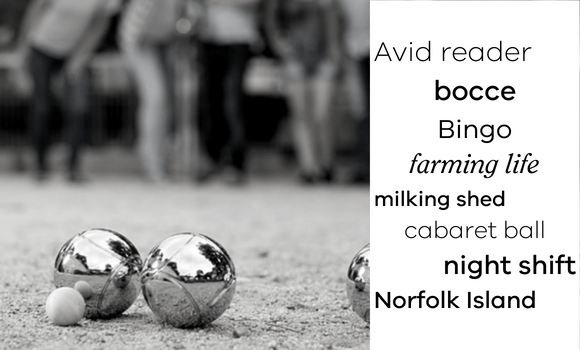 Margaret Keck has had a big stack of books on the shelf above her bed for the past six months, but the 88-year-old hasn’t had a chance to look at them.

Since moving into aged care at the end of last year, Margaret has been busy playing bingo and bocce among other activities.

‘I haven't had a chance to read. There's too much going on here. There are things going on all the time…one of the nurses reads the local paper to us and things like that. I'm happy here.’

Margaret is used to being busy. Born in Kyneton in 1934, she began work at 14 at the Lincoln Mills in Kyneton then began helping her dad and her oldest brother when they bought a farm in Kyabram.

‘John and dad worked on the farm, (my little brother) Finn did for a little while. Then he got a job at the cheese factory in Stanhope and, later on, I did too.’

When her dad and John were away at competitive wood chopping events, Margaret would have to milk more than 100 cows after finishing work in town.

‘Lucky we had the machines — if it was hand milking, I think I'd be still be there,’ she laughs.

It was a friend at the cheese factory who set Margaret up on a blind date with a local barman called Herb, who Margaret went on to marry in 1966.

‘I never went out much and this cabaret ball was coming up and the girls I work with at the factory, asked me about coming.

I said to them, “No, look, you’ve got to have a partner to go to these things”, and this girl says, “I'll get your partner”.

‘We went down to the pub for a counter lunch, and she introduced me to him,’ Margaret says. The date went well. ‘He had sense of humour and he was goodhearted.’

The couple had two sons and when their house in Kyabram became too small for the growing family, they moved to Stanhope and Herb got a job working for the Country Roads Authority.

Nightshift Margaret was a full-time mum when the children were babies but when they were a little older, she went back to work, working overnight at the local cannery.

Nightshift was tough but, ‘In those days if you wanted anything, you couldn't do it with one wage. Yeah. So that's what I did’. Her parents helped out, looking after the boys whilst Margaret worked.

When her father passed away, it knocked her for six. ‘He was a terrific father’.

Herb loved to fish and Margaret loved to travel so they would mainly holiday separately, apart from one memorable trip to Norfolk Island. ‘The people were so friendly. The kids and all. You'd be sitting down in the street. They'd walk across and say “Hello. How are you?”.’

Margaret continued to travel after Herb passed away. Whilst her travelling days are now over, she’s loving taking part in all the activities on offer at the place she is now happy to call home.