Nurse Laurel Mott was working nightshift at a hospital in Sydney on Christmas Eve, 1974, when news filtered through that Cyclone Tracy had hit Darwin. 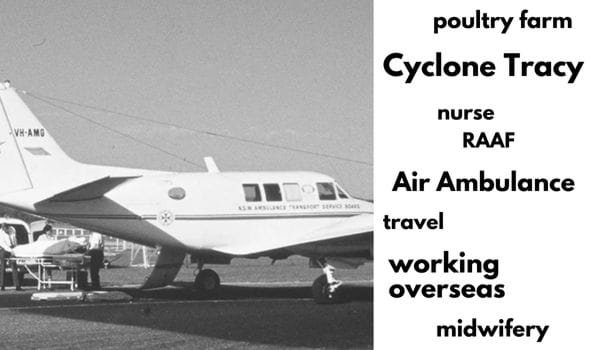 Nurse Laurel Mott was working nightshift at a hospital in Sydney on Christmas Eve, 1974, when news filtered through that Cyclone Tracy had hit Darwin. A reservist with the Royal Australian Airforce (RAAF), Laurel rang the airbase to volunteer and was put on one of the first flights north.

‘It was absolutely alarming to see the devastation. I did five medivacs from Darwin to Sydney with a Hercules planeload of patients. There were some horrific injuries from corrugated iron. Very traumatic.’

‘I was a bit like an only child and, to this day, they think I was spoiled. I just had my 87-year-old sister stay with us and she said, “You got away with so much”,’ Laurel laughs.

The family bought a free-range poultry farm and Laurel helped out collecting and washing the eggs.

‘I loved the chooks. I was brought up to have good manners and apparently when I put my hand under the chooks in the nesting boxes I’d say, “Excuse me”.’

Whilst Laurel always knew she wanted to be a nurse, she found the four years of training tough at times, but one of the many rewards was making life-long friendships. ‘There's four of us that are like sisters because we were each other's counsellors; we worked long shifts and we saw some pretty horrific sights as young teenagers, and we’d debrief with each other.’

Laurel went on to train in midwifery, then decided to join the RAAF.

‘The possibility of nursing while you were flying was just appealing. Our Officer training was a nightmare — we'd never marched our lives. The poor warrant officer went grey,’ she laughs.

After her first posting in NSW, Laurel was sent to Darwin for 15 months and then Malaysia for two years.

‘I loved it. It was a very interesting hospital because you treated not only service personnel, but their families, and we had a great team. There were tropical diseases, like funguses, and family complaints, and servicemen being wounded. I never got to Vietnam as a nurse, but the injured used to be flown from Vietnam back to Malaysia, so we nursed a few soldiers there.’

It wasn’t long after leaving the RAAF that Laurel was itching to fly again, so she joined Air Ambulance New South Wales.

‘In those days we didn't have doctors. It was just you and five patients, and you could be diverted anywhere mid-flight if there was a patient who was more urgent. You never knew what was going happen next, as Lindsay (her boyfriend at the time) will attest. He used to drive up from Canberra to take me out. I wouldn't be there. He’d find a note on the door, “Gone to Bourke, don’t know when I'll be back”, and I'd get back and the flowers would be wilted.’

Laurel married Lindsay, a civil engineer, in 1976. His work took the couple to Adelaide then Melbourne, where Laurel nursed until having her two children, then turned her focus to volunteering.

Through Lindsay’s work, Laurel has travelled and lived abroad in places including Vietnam, Malaysia, Indonesia and the Philippines.

‘We were in Manila for five months; it was going to be two years, but they had a revolution, so we had to get out of there. It was a peaceful revolution, but it was very annoying of them,’ she laughs.

‘Thanks to Lindsay, the second half of my life's been really interesting and enjoyable as well.’