Walking football is indoor soccer for people aged over 50. It has modified rules to enable people who aren’t very active to be able to participate. 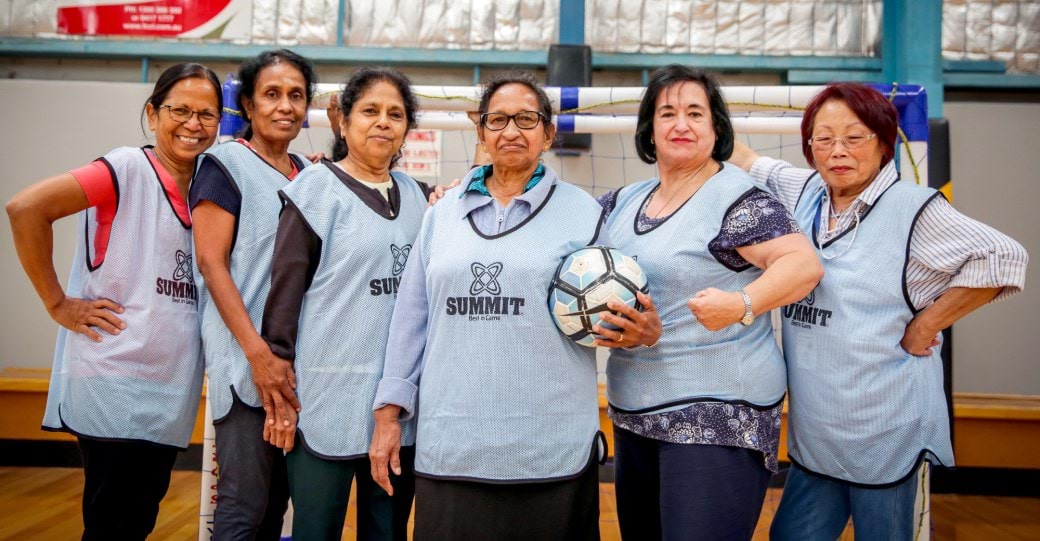 People from different cultures are bonding over soccer

The volunteer leaders of Whittlesea’s Walking Football Program know they’re succeeding when they have to remind their participants to slow down. Walking football is indoor soccer for people aged over 50. It has modified rules to enable people who aren’t very active to be able to participate.

‘The main differences are that you aren’t allowed to run, which slows the game down, and you must keep the ball low to the ground,’ says the program’s support coach, Con Constantinou.

‘I've had the privilege of seeing a lot of the participants from the beginning, where they were huffing and puffing and now when you see them there's no more of that,’ Con says.

‘When you have to stop them and tell them to slow down a bit, you know fitness levels have increased. It’s walking football – not running footy!’

A committed group of older Whittlesea residents from a range of cultural backgrounds has embraced the program.

‘Three years down the track, the program still runs every week,’ Con says. Participants range in age from 50 to 84, with about a third being women. Most had never played soccer before, coming to Australia from countries like Sri Lanka, Malaysia and China, where it is not a common sport.

‘We thought that the Italians and Greeks would embrace the game, but people from other communities also enjoy playing,’ Con says. ‘At first our team members weren’t particularly active, they didn’t want to play or be competitive but now their skill levels have just gone through the roof. ‘You see some people who were too afraid to kick a ball three years ago – their progress and the increase in their confidence is just incredible.’

The female players fielded two teams in one of the first walking football tournaments in 2017. Last year a ‘World Cup’ was held in Melbourne and in May 2019, a ‘Friendship Tournament’.

‘Their skill level had increased so much that they ended up playing against each other in the final,’ Con says. ‘That made it very hard to coach!’

Initially, the City of Whittlesea ran the program with the assistance of younger volunteers from Melbourne City Football Club’s community outreach program, City in the Community Foundation. Whittlesea U3A (University of the Third Age) now runs the program, which means participants can take advantage of their new U3A membership to participate in other U3A activities.

Con says walking football is the most rewarding program he has been involved in establishing during the course of his career. ‘The players absolutely love coming,’ he says.

The promotion of the program to leaders of Whittlesea’s 79 senior citizens clubs has been key to its success. ‘We’d have the president or secretary come to the program, and the following week they would bring five more people from their club,’ Con says.

‘Then we found friends were bringing friends and neighbours were bringing neighbours and now we have between 30 and 40 people that come every week. ‘It’s rare that someone comes and then says, “This isn't for me.” The majority that come usually stay.’

Find out more at the Whittlesea U3A Walking Football website.