Read about the recipients of the 2019 Victorian Senior of the Year.

Premiers Award for Victorian Senior of the Year 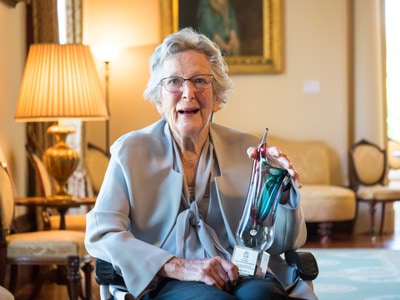 Ms Young has volunteered for the past 11 years for the Eastern Palliative Care Association, a specialist community based palliative care service that supports people in the community with a terminal or life limiting illness.

As Coordinator of the Ambassador program, Ms Young was responsible for promoting and presenting the program to many organisations who may otherwise not have had awareness of palliative care and what it can offer. Ms Young is also involved in the Home Support Program, visiting clients in their own home, and taking them to medical appointments or on outings as part of providing personalised support.

Ms Young’s approach to grief counselling is described as a source of great strength and dignity, working tirelessly with older members of the community to ensure people are cared for – especially those who may be living alone or living with a disability.

Recently Ms Young was diagnosed with Motor Neurone Disease and has volunteered to be the subject of an Eastern Palliative Care project documenting her struggles, emotions, feelings and health on film on the way to her own death.

Ms Young is also an active volunteer for organisations including Vision Australia transcribing for the vision impaired, and for the Smith Family as a community presenter in their Student 2 Student program which aims to improve the literacy skills of participants.

One of Ms Young’s associates from Eastern Palliative Care said Margaret is a truly inspiring woman, who approaches every situation with compassion and empathy – an immeasurable gift to people in the last stages of their lives. Read Margaret's acceptance speech from the award ceremony.

Nominated by City of Kingston Southern Migrant and Refugee Centre
Mrs Youssef is a volunteer with the Southern Migrant and Refugee Centre and the Coptic Orthodox Church supporting isolated Arabic speaking residents in aged-care facilities, the church and her community. She is championed as a remarkable fundraiser – mainly through her capacity as a cook – and the contribution this has made to the establishment and maintenance of the Coptic Village Hostel. In response to a need she identified for cultural and social gatherings for isolated older members of the community, she established the El Hokama Senior Citizens Group and continues to be central to the operations and success of this group. She has volunteered with the Italian Seniors Club in Clayton cooking Italian meals, delivered meals on wheels of Kingston Council for 15 years, and volunteered as a community visitor. Her referees are the Coptic Orthodox Church Diocese of Melbourne and the Australian Egyptian Association. Read more about Souria's story. 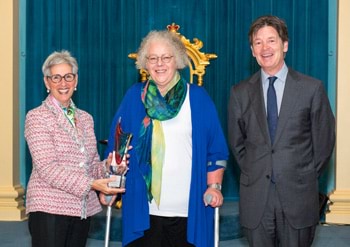 Nominated by Link Health and Community
Ms Bardsley transformed her personal struggles with gambling addiction to a very strong caring and advocacy role in the community. Volunteering as a participant and leader in the Three Sides of the Coin project, as a Victorian Responsible Gambling Foundation Lived Experience Committee member, and as a speaker and trainer for the ReSpin Speakers Bureau, Ms Bardsley has used her art to bravely tell her stories for the greater purpose of creating awareness and giving back to the community. Her referees are the Alliance for Gambling Reform, Artangel Documentaries, staff and volunteer colleagues and people whom she has supported. 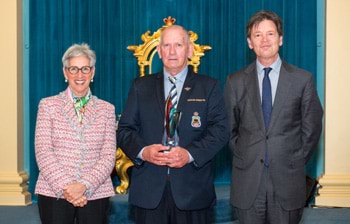 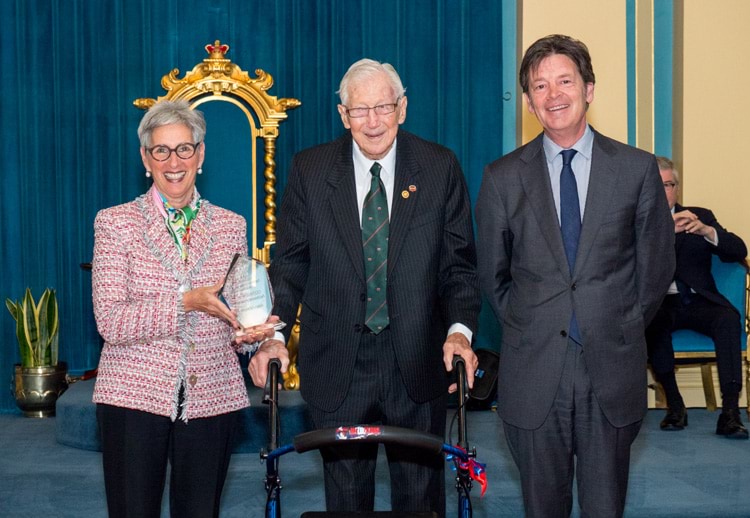 The 39th Battalion Association (1941-1943)
Mr Moore is a World War 2 veteran with 38 years of active volunteering since retiring in 1980. He is recognised and respected within many community-based organisations for his thoughtfulness, generosity and genuine nature. He has very extensive association within the veteran community and with a large audience of young people to whom he speaks about veterans and war-time experiences. He has volunteered for 34 years at an age-care facility as a handyman/repairer and more recently as a stalwart at their op-shop. He is a passionate member of the Kokoda Track Foundation, an organisation that raises funds for educational, medical and other necessities for Papua New Guinea villagers along the track. He also personally sponsors children from Kokoda. 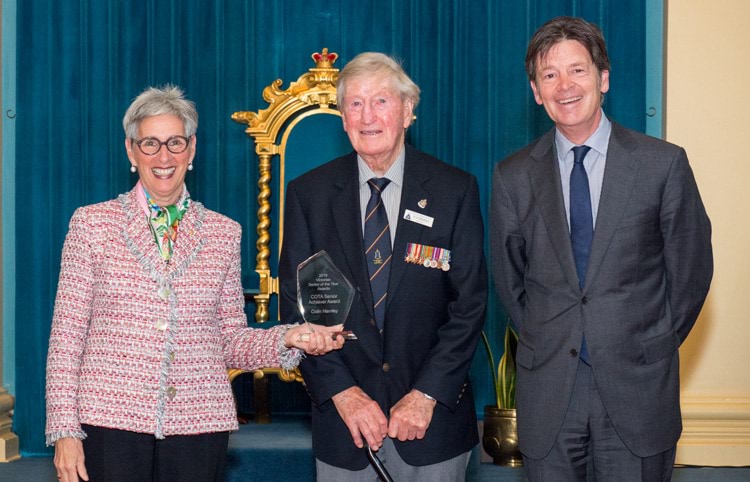 Nominated by the Ex-Prisoners of War and Relatives Association Inc.
Mr Hamley is a World War 2 veteran who enlisted at the age of 16 and survived the Changi Prisoner of War camp. He is a long-term member of the second 2nd Pioneer Battalion Association, serving as Secretary from 2000 to 2009, and as President from 2009 to the present. Alongside his administrative roles, he regularly visits members in hospital, and conducts commemoration services at former comrades’ funerals and at the Association’s reunions and pilgrimages. He regularly speaks at schools about wartime experiences and helps descendants of those he served with become involved in the Association to keep it active. As a supporter and member of the Kokoda Gym at the Heidelberg Repatriation Hospital he is an inspiration and mentor to younger veterans undertaking rehabilitation. 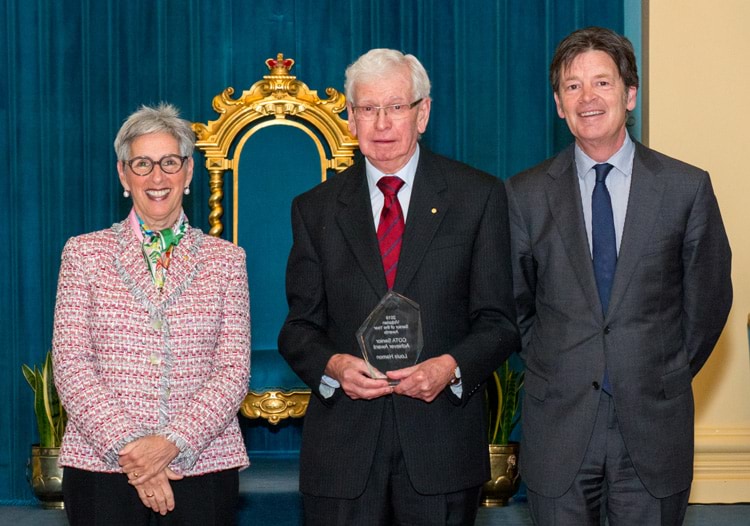 Nominated by Moira Arts and Culture Inc, Moira Shire Council
Mr Hamon was nominated for his contribution to arts and culture in the Goulburn Valley, for supporting local productions and for ensuring regional performances from major arts companies. He also has longstanding volunteer roles with Apex, the Anglican Church and the Numurkah Australia Day Committee, and Life Governorship of the Nurmurkah & District Health Board. His referees are the Anglican Parish of Numurkah, Rotary and the Numurkah Town Hall Committee of Management. 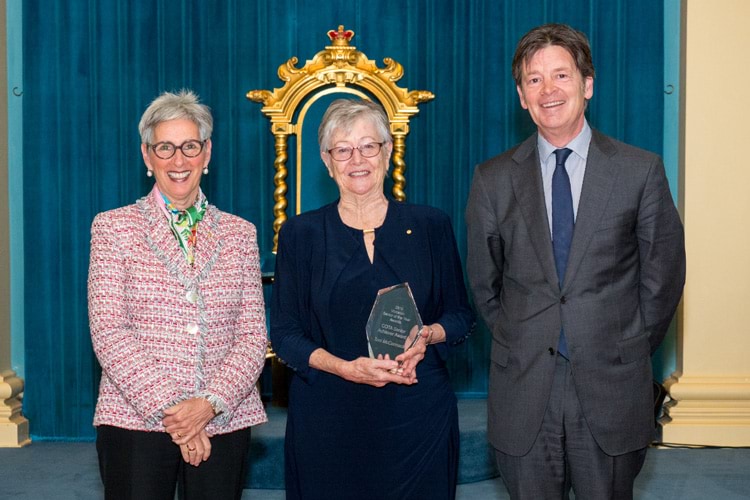 Nominated by U3A Surfcoast
Mrs McCormack was nominated for her work in instigating the rapid growth of U3A Surfcoast membership over the past four years. Membership is now in excess of 300. She is acknowledged for her outstanding strategic planning and project management skills which she has also brought to bear on two other important local community-based organisations - Probus and the Torquay Community House. She has harnessed the mutual interest these organisations have in creating age-friendly communities to ensure that the Surfcoast area offers a very diverse range of activities and events for older residents. Her referees are the Surf Coast Council, Torquay Community House and the Lions Club. 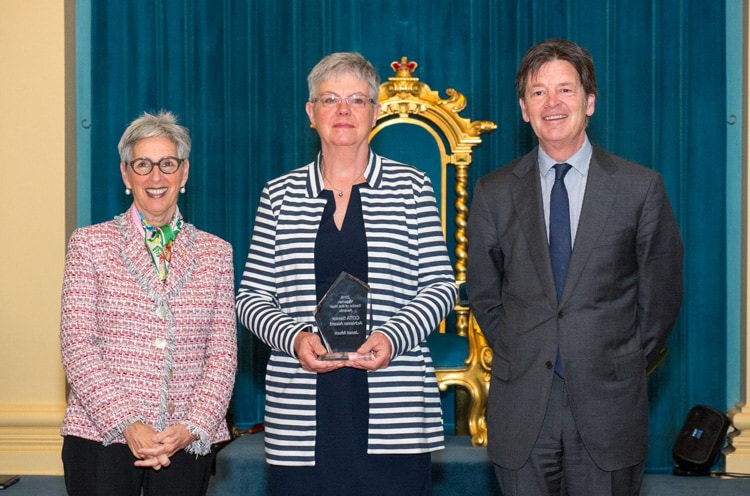 Nominated by Wimmera Volunteers and Wimmera Hub Centre for Participation
Mr Deckert has volunteered since his late teens in a range of roles, and since moving to Nhill ten years ago volunteers for the Country Fire Authority, the Nhill Tourism Committee of Council, and the Nhill Aviation Heritage Centre where he worked tirelessly to obtain three planes for the Navigational School. He was a major driver behind a fundraising campaign which saw $300,000 raised. Mr Deckert is the third-generation family member to be captain of the Country Fire Authority Winiam Fire Brigade, and he, his wife and three children have contributed a combined 205 years’ service to the Brigade. Mr Deckert is the recipient of a Wimmera 2019 Volunteering Recognition Lifetime Achievement Award. His referees are the Nhill Aviation Heritage Centre and Westprint Outback Maps and Books. 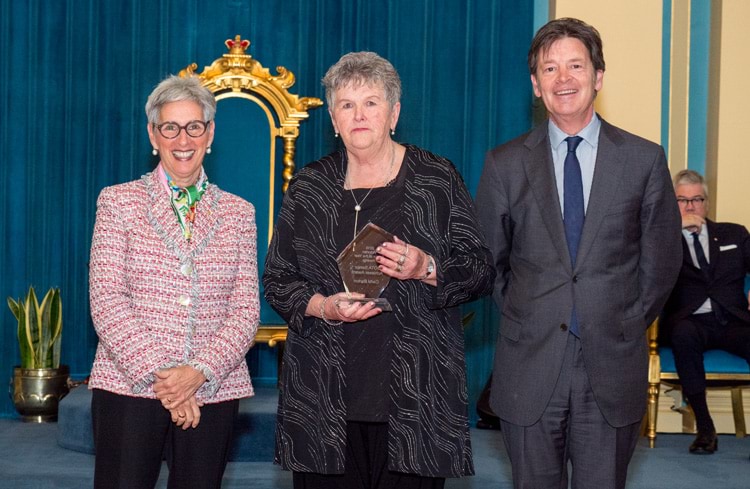 Nominated by Gannawarra Shire Council
Ms Barton’s worked to address a gap she identified in community transport for older people and people with disabilities by initiating the ‘Bus Stop” campaign. This led to the opening of an op-shop business and the purchase of an 11-seater bus and a wheelchair accessible car. Her referees are the CEO of Gannawarra Shire Council and the Secretary of Kerang Community Fundraisers Inc. Read more about Carol's story. 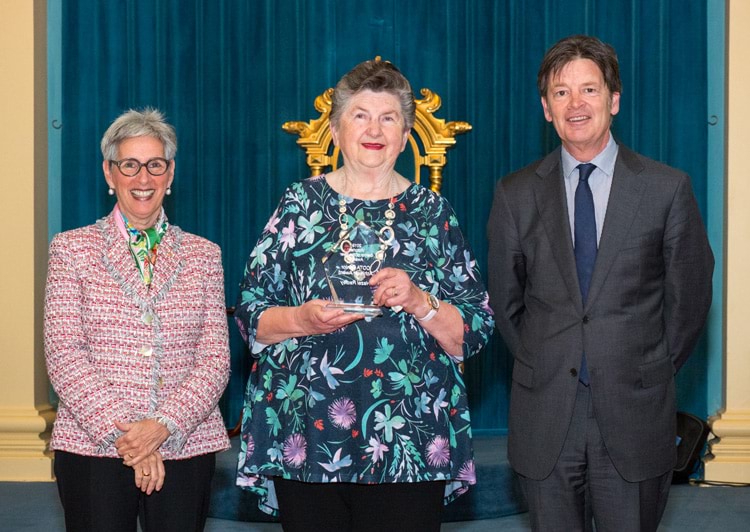 Nominated by Cohuna Neighbourhood House
Mrs Radley is involved in her community at every level, leading her community on a path to ageing with dignity, grace and harmony. She is recognised for her administrative and hands on support at Cohuna Neighbourhood House and for her work with Uniting Church outreach programs. Her referees are the Gannawarra Shire Council, U3A Cohuna and the Cohuna Cluster Uniting Church. 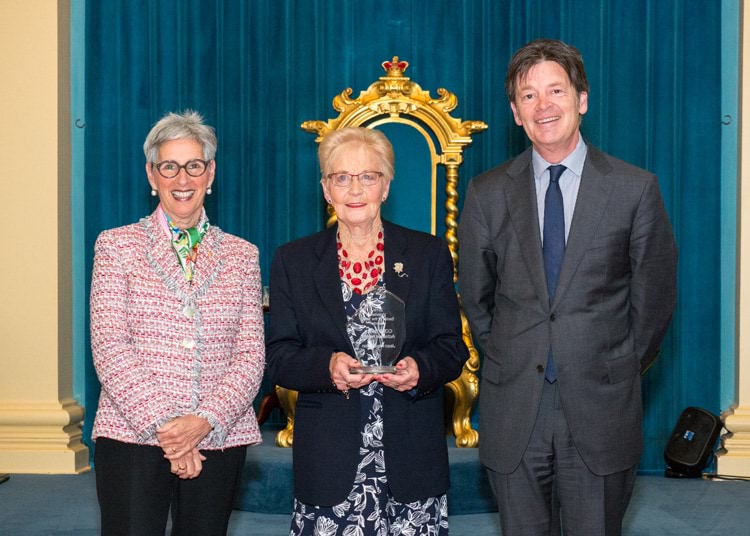 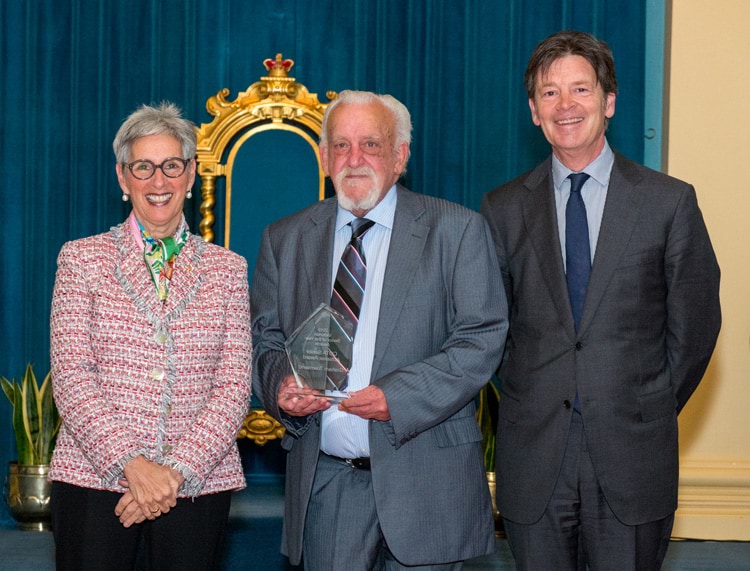 Nominated by Sacred Heart Mission
Mr Townsend is at the centre of the Sacred Heart community where he lives, and whose residents he cares about deeply. A recovering alcoholic, he has transformed his life experiences to become a very strong advocate. Graham is regarded as special – he has overcome adversity and publicly tells his story for the greater purpose of creating awareness and giving back to his community. As the Resident’s Representative, he is an articulate organiser and advocate for residents, conveying their needs to Sacred Heart Mission staff to ensure they get access to services of their choice. He orientates and welcomes new volunteers to the Mission and organises hospital visits for residents without families, who are the majority. His referees are from the management team at the Sacred Heart Mission Residential Aged Care. 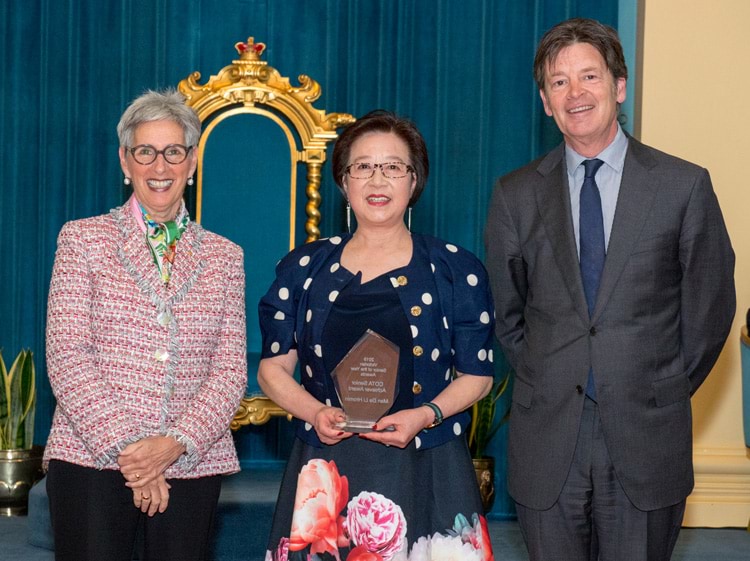 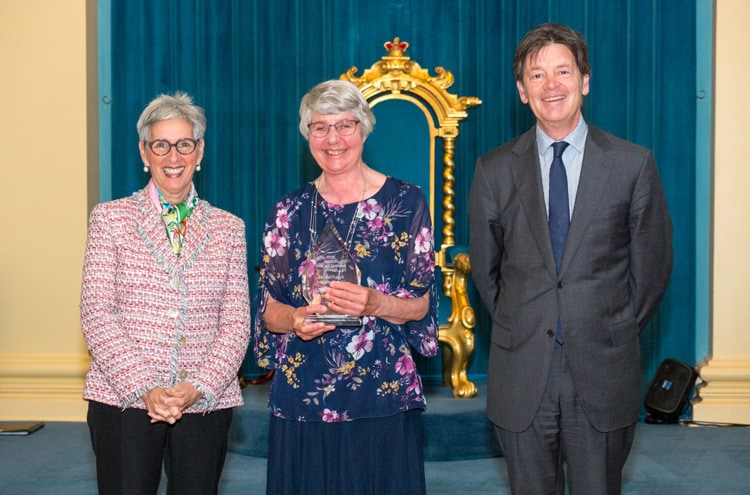 Operating since 1998, the West Gippsland Bush Walkers provides opportunities for older Victorians living in regional Victoria to get involved in day walks, walking holidays and other social events. Their purpose is to provide safe and environmentally responsible bushwalking to promote fitness and a healthy lifestyle along with social interaction. Participation in the club provides opportunities for members to exercise, connect to the bushland environment, interact with each other and develop friendships.

The overall planning and management of the club is undertaken by older volunteers, and all members are supported to take on these roles over time. Ninety-six per cent of the club’s members are aged over 60, and they have devised a range of activities to suit peoples’ age and fitness levels, allowing people choice and confidence in their participation.

With three different levels of walking groups offered on a fortnightly basis, there are also fortnightly reconnaissance walks, week-long trips away, and clearing work done with Parks Victoria. Baw Baw Shire Council has provided equipment which has allowed the club to document over 150 walking routes covering 2,000km of track.

Many of the members also participate in community volunteering including for Mawarra, Baw Baw Sustainability Network, Baw Baw Food Relief, Meals on Wheels, Drouin Stationeers, Warragul Rotary and other organisations in West Gippsland.