Born in 1930, Priscilla was living with her parents and sister in London when the war began. ‘They were sending children to the country to be safe — to go and live with strangers'. 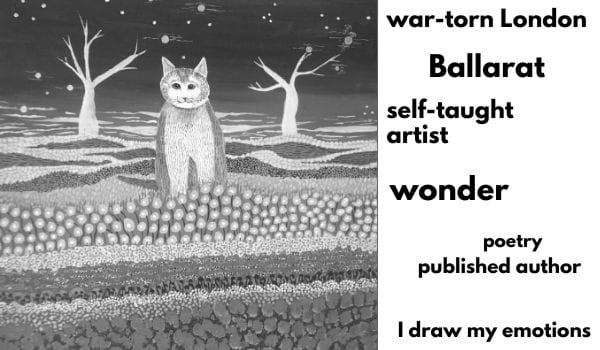 The trauma and dislocation Priscilla Friend experienced as a child in war-torn London has left the 92-year-old with a life-long fascination with the meaning of life and a wonder at the miracle of living on planet Earth.

‘Imagine bombs begin falling around you and you are nine years old. That has to change you,’ Priscilla says.

Born in 1930, Priscilla was living with her parents and sister when the war began.

‘They were sending children to the country to be safe — to go and live with strangers. My mother didn’t want to do that, but one night the bombing was so bad that she sent me off to live with my grandparents in Gloucester the next day,’ Priscilla says.

Priscilla lived with her grandparents for four years, returning to the capital when she was 14. With her school shut due to the war, she had no choice but to begin her working life, taking a job at a men’s wear store.

Priscilla worked at various department stores in London, where she met her husband, Leslie, who was five years older.

The couple later emigrated to Australia and settled in Ballarat with their young son, after Leslie was asked to help set up a new Mars chocolate factory in the Victorian country town. It was an easy decision for the couple to making as they had already spent time in Australia and Priscilla had family in Victoria.

‘My sister and her husband had moved to Australia and brought my parents with them,’ Priscilla says. ‘They lived in Melbourne, and we’d visit when we came into town.’

Art has been one way Priscilla has dealt with the lingering shadow cast by her wartime childhood. She is a self-taught artist who creates intricate line drawings that she has sold in galleries in Melbourne, with one on display at Ararat Hospital.

Whilst Priscilla can’t remember much of her life, she has published her own beautifully illustrated book of musings and reflections, entitled Life’s Observations: Poems and Paintings.

‘I draw my emotions,’ Priscilla says.

A widow for the past 15 years, Priscilla spends much of her time musing about the meaning of life and how incredible it is that we live on a planet within the solar system.

‘I’ve drawn a cat standing against a dark background looking at the sky,’ Priscilla says. ‘That cat is me and I’m ready to go.’

Deep deep down
I am you
And you are me
We are the world
Meeting and hiding in chaos
But sometimes we understand
And that is love
And a soul connection.
I am the air, the earth, the sea
I am a bird, an animal, a tree
I am the sun, the moon, the stars
I am the space from here to Mars
I am
Tick tock
Time passing now
This second
Enacting