Going to school in Ballarat during World War II, Dawn Parish clearly remembers having to take shelter during air raid practices and worrying about her father, who was serving overseas. 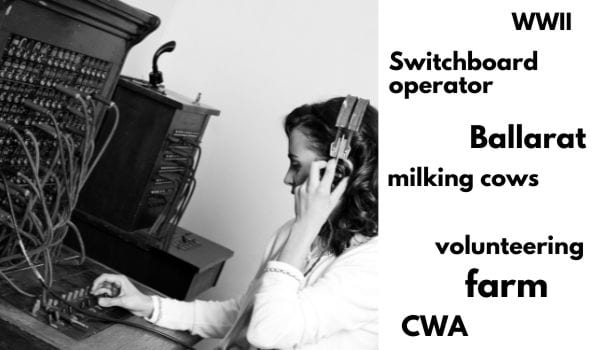 Going to school in Ballarat during World War II, Dawn Parish clearly remembers having to take shelter during air raid practices and worrying about her father, who was serving overseas.

Dawn was born in Hopeton in 1933. Her mother suffered from a mental illness and was hospitalised while her father was away during the war, so Dawn and her siblings were sent to live with their aunt in Ballarat.

‘We were more aware of the war in Ballarat because they used to tape their windows and there were no lights at night. That was a bit scary. At school we'd have air raid practise, where they'd sound the siren and you'd have to run out and lie in the gutter — but you just did it, it was just part of our lives. Everybody was in the same boat.’

Thankfully, Dawn’s father did return safely, albeit minus a lung, and the family reunited in Hopeton. Her father’s work meant they had to move around Victoria and Dawn completed her Intermediate Certificate at Kilmore Convent School.

‘The nuns were pretty strict, but they were nice.’

Dawn was 21 when she married a local farmer, George Parish, in Charlton.

‘He was a Methodist, and I was an Anglican and we met at the church youth club. We had a farm out in the country, seven miles out of town, and I had five children. I was desperate to have a baby. I wanted to have a baby straight away, but she didn't turn up for a while. Once I started, I couldn't stop!’

Both brothers had a house on the family farm and Dawn’s children grew up alongside their three cousins.

‘It wasn't a very big farm. It was a bit of a struggle, but we managed.’

Apart from looking after the children and milking the cows, Dawn threw herself into volunteer work, assisting with the children’s various activities as well as organisations such as the Red Cross and Probus.

Dawn baked to raise money for the CWA. ‘I might have been the president of the CWA in Charlton at one time — everybody got a turn at doing it. I was never a champion cook, but the kids used to love lamingtons and I can make a sponge.’

When the farm was sold, Dawn and George moved into town and Dawn enjoyed working part time as a telephonist. This was back in the day when the switchboards were manual, and the telephonists had to insert phone plugs into jacks to connect calls.

‘You could be very helpful,’ Dawn says. ‘People would ring up and say, “Can you put me through to so and so?”. A lot of people didn't know the numbers, but we knew them. Then it was automated, and we all lost our jobs, and I got a nice little payout, which I didn't mind one bit.’

George sadly died of a brain tumour in 2021, only a few years after his twin succumbed to the same cancer. Dawn now enjoys regular visits from family; including her 14 grandchildren and 14 great grandchildren.