Brian Jones father had moved to the small Victorian town of Casterton at the height of the Depression when work was scarce. 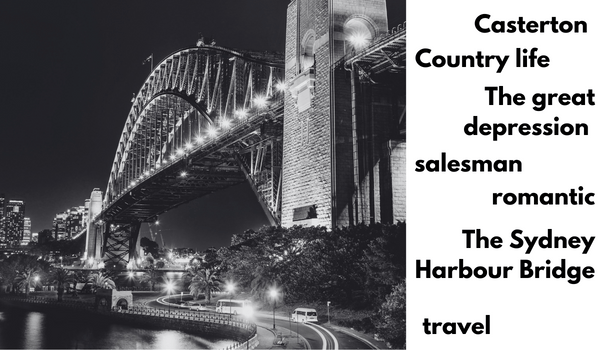 Brian Jones father had moved to the small Victorian town of Casterton at the height of the Depression when work was scarce.

A boilermaker by trade, Brian’s dad was unable to find a job in Melbourne and, with the car tyre re-treading equipment lent to him by his brother, he set up shop in the town closest to Melbourne that did not have a competing business.

Whilst his work flourished, Brian’s mum was not a fan of country life and when Brian was three years old, in 1936, the family moved to Richmond.

Brian enjoyed school about as much as his mum loved Casterton, so he left at 16, but it took him some time to find work that he was suited to.

His first job was at a company that made electricity meters.

‘There was a lot of mathematics involved and I couldn't handle mathematics.’ Brian has always been a bit of a looker and people told him he could be a great salesman.

‘I thought, if I look the part, being an insurance agent should be good. So, I got a job with one of the big companies, but I was no good as a salesman. I couldn't push people into buying policies if they didn't want them.

Eventually I gave that job away and I took on selling cigarettes.

‘Smoking was very, very popular back then,’ he says.

Brian had a little van and he delivered cigarettes and tobacco products around the city before finding his favourite and final job, as a delivery driver for a trade union’s printing company.

Brian met his wife, Nancy, through a friend and proposed in a very romantic fashion, on the Sydney Harbour Bridge. ‘She accepted me, and we got married.’

Driving the van around Melbourne paid off and soon Brian had saved enough money to begin indulging in his passion for travel.

‘Nancy travelled with me to Egypt, but she wasn't a keen traveller, whereas I was absolutely obsessed with the idea of going to Egypt and going to China. I had a great passion for history. Egypt was wonderful — the pyramids and the cruise on the Nile. That was wonderful, and then of course China was a wonderful country from a historic point of view. I went to China five times, actually.’

Despite his multiple visits to Egypt, he never climbed the pyramids.

‘I was a bit scared of them. They were so impressive.’

The couple built a house in Doncaster and made their own family, adopting two lovely baby girls.

‘We were unable to have children ourselves. We found Nancy couldn't carry a child. She used to go one, two, three, four months, and then lose them. You could have set your watch by that, and the doctor said to us, “Well, what's the point in going on?”. He said, “We're up to our neck in babies at Box Hill — I think you should adopt”.'